Great Scotland Yard Hotel, London To Open As The First Hotel In The UK Under The Unbound Collection By Hyatt Brand In Late Summer 2019

The hotel is set to become a modern British destination with a food and beverage concept by Chef Robin Gill.

Once the infamous and historical home of law and order in London's City of Westminster, Great Scotland Yard will be a modern destination, an innovative and lively space with a selection of outstanding food and drink offerings. Stripping back the grandness and elitism of the building's past while remembering its history, the hotel will offer a modern British experience that's rooted in hospitality and suited to such a historic landmark; a country estate in the heart of Westminster.

Chef Restaurateur Robin Gill - the acclaimed founder of The Dairy in south London - will oversee all of Great Scotland Yard's food and drink culture and community. Robin will be joined by core members of his team, including Alex Harper who he originally met working at Le Manoir, and who will be taking up the helm at Great Scotland Yard as Executive Chef. He will also bring with him Lewis Wright as General Manager - Food & Beverage, with whom he has worked for several years. Robin, together with Alex and Lewis, will lead with their relaxed style of seasonal British food and warm hospitality to create a new culinary destination at this Great British landmark.

Great Scotland Yard will be Robin Gill's first foray into the hotel industry. Involved in the development of the hotel's food and drink spaces from an early stage, Robin's influence can be seen throughout, from the design of the open kitchen through to the fun, contemporary atmosphere in the two bars, to a shared culture rooted in seasonality and classic cooking techniques. A focus on in-house production will infiltrate the spaces, for example with house made gin and an in-house butchery and bakery. Robin's Bloodshot Supper Club is well known in the food industry, and something of the supper club's buzzy, late night, food-loving spirit will be evident in his vision for Great Scotland Yard.

The first UK hotel to join The Unbound Collection by Hyatt, Great Scotland Yard Hotel, London, will comprise 152 luxury rooms ranging from Standard King Rooms to a number of suites, as well as a complete two-bedroom Georgian Townhouse, that can be booked for exclusive stays or events. The rich history of the iconic Great Scotland Yard was integral to its renovation with nods to the building's notorious past featured throughout. Once a dwelling for visiting Kings of Scotland during the Tudor period, today the building is most famous as the former headquarters of the Metropolitan Police force. It was during this time the Plaistow Marshes and Jack the Ripper crimes were investigated at Great Scotland Yard, and the building was immortalised in the works of writers including Dickens and Conan Doyle. In 1910, the building served as the British Army Recruitment Office and Royal Military Police headquarters and it was here that Lord Kitchener famously told WWI recruits 'Your Country Needs You'. The building's bespoke renovation is being undertaken by leading developer Galliard Group with design from architects HBA International. Upon completion of the renovation works, the property will be owned by Twenty14 Holdings, the hospitality arm of Abu Dhabi based Lulu Group International, who have entered into a £110 million forward purchase agreement with Galliard Group.

Food and Drink - The GSY Society

Central to the food and drink offering will be The Yard, a modern British restaurant showcasing the very best of the UK countryside in central London. The restaurant will champion quality farmers, suppliers and producers through a menu of classic yet contemporary dishes. Music will play a key role in the lively restaurant space with Robin himself creating the playlist.

Cocktail bar The Forty Elephants - named after a notorious all-female gang of thieves who were active throughout the 19th and 20th centuries - will celebrate off-beat, underground London. Portraits of the Forty Elephants gang members will adorn the walls etched in glass, and their stories will permeate the space. The cocktail list will be inspired by Great British libations, looking to breathe new life into the old and create contemporary classics from those of the past.

Modern tearoom, The Parlour, with design inspired by The Imperial hotel in Delhi, will have a colonial and classic feel. Paying its own unique tribute to British tradition and embracing the quirkier side of the establishment, The Parlour will be a daytime space for morning coffees, light lunches, gin and tonics and afternoon teas.

A second drinking space will be the more intimate Sibín. This stylish and illicit drinking club, will celebrate quality whisky with a menu of limited edition whiskys focusing on extraordinary flavours and styles. Sibín's warm, beautiful setting and party atmosphere are a decisive step away from the stuffy gentleman's clubs of Whitehall, this is a place for socialising and late-night merriment.

In the hotel's basement will be Grace and Favour. A modern take on the historical 'grace and favour' residences, this collection of apartment style event spaces offers a unique setting for social gatherings and a co-working space with a sophisticated atmosphere. The event space can also be exclusively booked for small and intimate events, meetings and celebrations.

The Unbound Collection by Hyatt 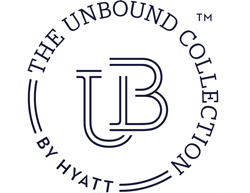 The Unbound Collection by Hyatt brand is a portfolio of independent, premium hotel properties, ranging from historic urban gems to contemporary trend-setters and boutique properties to resorts. Whether it is a fascinating past, an exclusive location, famous architecture and design, or an award-winning dining experience, each of the brand’s 19 hotels has its own distinct narrative and creates novel, story-worthy experiences for guests.
brand information
Brand Owner