Fitler Club officially opened in June 2019 as a spectacular hub for Philadelphia's achievers – and a luxurious "stay/work/play" destination that will revolutionize the segment of members only clubs. The club is the first gem in a collection of clubs planned for cities nationwide.

Founded by David Gutstadt, formerly with Equinox Hotels and a longtime hospitality executive who drew on his global travels for ideas and inspiration, Fitler Club encompasses 136,000 square feet of jaw-dropping design, leading-edge technology, and modern luxury. Under one roof at the club: A stunning 14-room hotel, unparalleled gym and spa, 34,000 square feet of workspace and private office suites, and refined yet relaxed culinary and event venues.

Gutstadt and his A-list team of investors plan to open a collection of private clubs across the country by 2025, each reflecting the soul of its home city. In every city, Fitler Club's iconic door logo will get reshaped by local culture, lore, and history. Each club will also take on a name that reflects its home city. Dynamic cities like Dallas, Boston, Toronto, and Washington, DC. are in the prospective pipeline.

Diverse Membership to Include CEOs and Founders, "Up-and-Comers" and Achievers

Preliminary membership is capped at 2,500 - all of whom will be vetted through an inclusive but meticulous application process.

The club already boasts a long waiting list, Gutstadt said. "Although 80% of our first 500 members were comprised of high-profile founders and CEOs, our membership process is intentional and deliberate to ensure our community is diverse in background, profession and thought, and includes established leaders, emerging leaders, up-and-comers and intriguing, high-achieving people" he said. The membership process starts with an online application and includes an in-person meeting as well as an orientation with other prospective members. As part of their welcome, new members get a limited-edition, custom-designed black tote bag from mission-driven LA cult label Apolis, with the Fitler Club logo.

With A Modernist Ambience, Fitler Club Reinvigorates a Historic Building

Fitler Club's members-only offerings include The Dining Room, an extraordinary restaurant helmed by legendary Philadelphia chef Marc Vetri; three bars where members can have a drink or hang for an evening; an extravagant, industrial-chic 14-room hotel named The Rooms at Fitler Club; one of the largest and best-equipped urban gyms in the country, called The Field House; a members-only workspace Gutstadt describes as "a business lounge on steroids", The Study; a high-ceilinged, brick-walled, contemporary event space unlike anything else in Philadelphia; and a cinema-quality screening room with 50 seats.

A spectacular 20,000-square-foot private swim club - with one of the largest roof decks in the world - is slated to open next year on the roof of an adjacent building.

The club will also team with Philadelphia arts organizations and artists. In a 21st-century twist on a precious tradition, the club will offer residencies to artists in exchange for work that will become part of the club's ever-evolving environment. Fitler Club's first artist in residence: King Saladeen, the Philadelphian whose abstract work has been displayed at the New York Stock Exchange, and whose capsule collection for Champion x FootAction was a smash sellout. King Saladeen will create a bespoke mural inside Fitler Club's Field House.

Fitler Club will also work with Philadelphia arts collective, Tiny Room for Elephants to curate a miniature gallery and mural inside a photo-booth room in the club's high-tech event space. The first gallery show will be by Philadelphia artist Flygirrl. 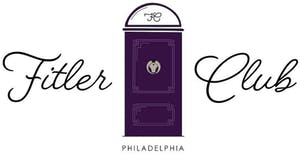 Located in the heart of Center City, Fitler Club combines best-in-class social, hospitality, business and wellness elements into one cohesive offering. With high-end design and an exceptional location, we have created a 24/7 “stay/work/play” atmosphere unlike anything in Philadelphia, or the world.
more information
Hotel Details