Lowe and Atlas Hotels today announced the completion of the team's comprehensive, multi-million-dollar renovation and repositioning of the 675-room Town and Country resort in San Diego. The vast 40-acre urban resort hotel and conference center is located on Hotel Circle North in Mission Valley.

Lowe created a mixed-use program for the property that included reducing the number of hotel rooms from 954 to 675 in order to add to the outdoor recreation and gathering places as well as bringing residences to the site. Lowe's plan has been realized with the reopening of the resort and the 2018 sale of approximately 10 acres to Holland Partner Group for apartment development, the first phase of which is currently under construction.

The new Town and Country

The overarching design standard for the property draws from its origins in the 1950s, which many consider the height of America's mid-century modern period. The architecture and interior design elements from this era have retained popularity and influence. Throughout Town and Country, from the lobby and public areas through to the guest rooms, the color palette, furnishings and design elements are a contemporary take on mid-century modern, the combination of which has transformed the property into an inviting and bright new California classic.

Town and Country features 675 renovated guest rooms and suites, a mix of one- and two-bedrooms with private balconies, and five top-floor Skyline suites of approximately 1,100 square feet with expansive views. Guests will enjoy the property's two swimming pools with poolside cabanas, one children's pool and a new waterslide. A penthouse fitness center offers the latest equipment, exercise and yoga classes, with a wall of windows for abundant natural light and valley views.

Dining options at Town and Country have been expanded and begin when you enter the central lobby with a modern lounge offering a menu of small plates and cocktails. Arlo is the resort's captivating main restaurant, a new culinary concept from Chef Josh Mouzakes, drawing on locally available ingredients. MRKT provides a fresh grab-and-go spot while Lapper is the poolside dining outlet, with both indoor and outdoor seating, offering breakfast, lunch and dinner, while Trixie, a "canned-ham" style trailer, offers fast, easy casual fair.

A key component of Lowe's reinvention of Town and Country is the designation of 12 acres for the public. It has restored the natural habitat in this area alongside the San Diego River which runs through the property, while creating a three-acre park with benches and seating and interpretive signage. The area also features a new pedestrian bridge and a multi-use trail system that adds to the existing 17.5-mile San Diego River Trail.

"Town and Country is now reinvented for the future while retaining its historic appeal. It is a destination resort with a superior location, close to San Diego's numerous attractions and convenient to downtown. Town and Country also provides the area's largest meeting space outside of the convention center," noted Lowe Executive Vice President Matt Walker who oversees the asset. 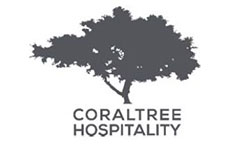 CoralTree Hospitality Group is poised to disrupt the status quo of traditional hotel management. With our background as both owner and operator, we understand what it takes to create a truly distinctive experience.
more information
Hotel Details