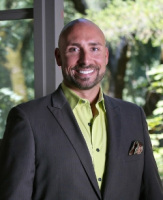 Meadowood Napa Valley welcomes Michael Conte as Director of Spa & Wellness. Conte's initial focus will be leading the opening team of the new 14,000-square-foot, all-suite Meadowood Spa anticipated to open this fall, as well as creating an elevated spa experience for the estate. Just prior to joining Meadowood's Executive Team, Conte was the Director of Spa at Montage Laguna Beach, Calif, where he led the Forbes Five-Star Spa to garner two consecutive World Spa Awards for Best Spa of North and South America. The new Meadowood Spa will have eight treatment suites (six singles; two couples'), each offering leafy, forested views and a spacious, private environment for treatments and complete relaxation. Under Conte's team, each guest's visit will begin with an in-depth conversation with a Spa Therapist, all of whom are trained in wellness coaching. The conversation will determine a curated treatment plan for each individual. The guest will then be escorted to his or her suite, which includes a private bathroom, steam shower, daybed and space to enjoy tea or light snack. Conte holds a BFA in Musical Theater and a minor in Directing from The Boston Conservatory in Massachusetts. He later shifted his professional focus and in 2005, retired from professional theater and went back to school, attending Mueller College of Holistic Studies in San Diego and graduating a Holistic Health Practitioner. After performing massage for a little more than three years, Conte was voted one of the best massage therapists in Orange County by RIVIERA magazine while working at the premiere Orange County Day Spa, Spa Gregories. During this time, he also was part of the opening team for the Renaissance Club Sport in Aliso Viejo, Calif. as Lead Therapist. In 2008, Conte joined the Spa Leadership team for the opening of The Resort at Pelican Hill along the Newport Coast and was instrumental in helping to achieve a Forbes 5-Star rating before later joining Montage Laguna Beach. He has volunteered and partnered with non-profit Greet the Day, an organization dedicated to providing free spa treatments to individuals fighting cancer and also volunteers for the International Spa Association (ISPA).
More from Meadowood Napa Valley
Map
Advertisements
Never miss a story again
Sign up for the HN360 daily newsletter
Media Kit – Submit Content
Advertisement
Advertisements