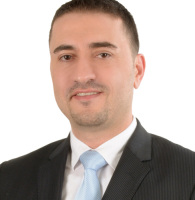 Boasting extensive leadership experience in finance, throughout his career Odeh has worked for private and publicly listed companies such as Price Waterhouse Coopers, Manarah for Investment in Development Projects and Abu Dhabi Ship Building, where he acquired his expertise in the assurance and business advisory field as well as a number of other investment sectors. He has developed specialist advisory competencies for hospitality companies. Odeh holds a Master’s degree in business administration with emphasis on accounting. He additionally finalised his Doctorate in business administration at the UAE University, Abu Dhabi, focusing on the governance of audit firms for SMEs in the UAE. Adding his list of qualifications, he is also a Certified Public Accountant (CPA), Certified Risk Management Assurance (CRMA) and Certified Master Trainer (CMT). In his new position as head of finance, Odeh will directly coordinate the activity of the ADNH finance department as well as its affiliated business units.

8 September 2015 — Assuming the role of senior manager, procurement, Joseph joins the ADNH team with more than 12 years of experience in the procurement field, most of which was acquired in the hospitality field with UAE-based organisations.
read more

2 September 2015 — Abu Dhabi National Hotels (ADNH) welcomed Rutger Smits to their team yesterday to head up its operations as Chief Operating Officer. In his new role at ADNH, Smits will oversee the operations of the Hotels Division, Retail Division and Sunshine Travel and Tours.
read more