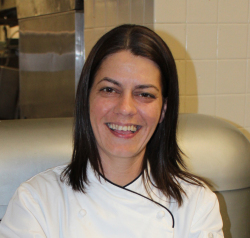 The Hilton Chicago/Oak Brook Hills Resort & Conference Center has announced the appointment of Erica Tomei as Pastry Chef. In her new role, Tomei will head dessert and bakery operations for the resorts catering functions, restaurant outlets and retail shops. The winner of the American Culinary Federations 2014 wedding cake competition makes Oak Brook Hills a one-stop-shop for house-made wedding cakes, pastries and oth er baked specialties, something few hotel kitchens can offer. Tomeis style goes hand-in-hand with Curry. Her creations play off his modern farm cuisine, utilizing seasonal ingredients that are sourced locally. According to Curry, Tomeis unique ability for flavor profiling is evident in her beautifully balanced desserts. She is not afraid to think outside the box, to mix a little sweet and savory. Tomeis gift for combining flavors to create something truly special also translates to the ethnic market. For example, she adds mango to a mousse-filled wedding cake to appeal to the South East Asian culture, whom believe mango is the fruit of the gods. Tomei brings a variety of signatures to Oak Brook Hills, such as her renowned honey-infused concepts that incorporate fresh honey harvested from beehives located on hotel grounds. Her honey wedding cake, honey truffle, and honey scone have all received notoriety, including a feature write-up in Modern Brides magazine. Above the individual assets Tomei brings to the table, she gives the resort an in-house scratch bakery that can be promoted across several business segments, from the [planned] patisserie retail outlet to the weekly wedding reception. The Chicago native describes her style as modern classic. Simply put, I take classic desserts and find ways to distinctively reinvent them with a contemporary twist, described Tomei. One such way is through the cultivating of yeast. For the last six months, Tomei has been nurturing her own yeast strain through a dough starter at home. After it continues to naturally grow, she will eventually use the starter as the base for Oak Brook Hills new artisan bread. Tomei and Curry have plans to ramp up hotel retail in 2016 with the launch of a patisserie that showcases all of Tomeis pastry specialties, from her award-winning honey cake to her original artisan bread. The patisserie will be open for business to hotel guests as well as the outside public (via walk-in or call-in order). About Tomeis Background: Tomeis talents and experience run deep. She started in the industry 14 years ago at a small gourmet catering shop in the western suburbs of Chicago. After four years of learning on the job, Tomei decided to go to culinary school at Kendall College to achieve her degree in baking and pastry. During her time in culinary school, Tomei obtained an internship at the Marriott Michigan Avenue, and worked within Marriott branded hotels for the next nine years. After being at the Marriott Michigan Avenue property for four years, Tomei hungered for a new challenge and jumped at the opportunity to open the new JW Marriott Chicago, a $20 million F&B operation. A little over a year later she was sought out by Executive Chef Sean Patrick Curry to be the first Pastry Chef at the Chicago Marriott Naperville. Knowing the job would be challenging, Tomei accepted and built a prosperous pastry department in the three years she was there. Tomei now reunites with Chef Curry for another exciting culinary adventure. Were going to build the western suburbs most successful pastry department at Oak Brook Hills, she proudly asserted. Tomei has had numerous recent awards and achievements, including: -2012: 1 of 20 competitors in the international three-day pastry competition hosted by starchefs.com in New York City. -2013: 1st place in the celebration cakes category in Iowa through the ACF (American Culinary Federation) -2014: 1st place in the wedding cakes category in Iowa through the ACF -2014: 1st place in the showpieces category in Iowa through ACF