Appointed General Manager
At The Domain Bahrain in Manama 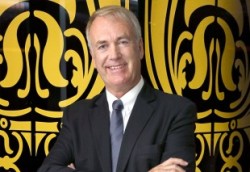 Moving from Carlson Rezidor Group, Frank Normann Eikeland has joined The Domain Hotel and Spa, Bahrain as its new general manager. Norwegian national Eikeland has more than 30 years of experience in the hospitality industry. Prior to joining The Domain team, he worked as a general manager in hotels across Norway and the Middle East - these include Radisson Blu Resort El Quseir in Egypt , Radisson Park Inn in Saudi Arabia and the Radisson Blu Resort in Fujairah, UAE. He began his career as a bellboy and worked his way up to director of restaurants in Sheraton Norway. From food and beverage division he transferred to the sales and marketing division, eventually holding the title of regional director- sales and marketing with Radisson Norway. He holds a bachelor’s degree from the Hotel Management School of Hospitality Management in Norway. The first general manager and managing director of the property was Patrick de Groot, who left in late-2014. In February 2015, assistant general manager Stephen Daniel was brought on board.

The Domain Bahrain is an innovative "hotel-club concept" designed to offer a socially charged members club with the added benefit of hotel rooms. A 36-storey, 131-key property in Manama's Diplomatic District, the Domain Bahrain promises to focus on sociability, entertainment and technology.
more information
Recent Appointments at The Domain Hotels

17 February 2015 — With a clear passion for hospitality, Daniel has been part of the ever-evolving industry since 1987. In 1993, he moved to Bahrain and worked at Holiday Inn, now known as Crowne Plaza Hotel, in the housekeeping department as a room boy.
read more
More from The Domain Hotels
Map
Advertisements
Never miss a story again
Sign up for the HN360 daily newsletter
Media Kit – Submit Content
Advertisement
Advertisements