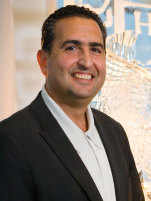 Hart Hotels has named Gerard Kiladjian as General Manager for its Maine properties: The Inn at Diamond Cove, Diamond's Edge Restaurant and Marina, the Portland Harbor Hotel and its restaurant, Eve's at the Garden. This marks Kiladjian’s return to the Portland Harbor Hotel, where he was General Manager of the property from 2004 to 2014. During his absence, operations in Maine have expanded substantially. Alan P. Incorvaia, Vice President of Operations, said, "In addition to our Hotel and Restaurant properties we have also added the Joseph S. Kennedy. This historic ship will be used to transport guests and staff to Great Diamond Island as well as give historic tours on the Bay”. Incorvaia continued, "All of this presents a great challenge for the right individual and I am more than pleased to have a proven man like Gerard at the helm." With 25 years of experience as a hotel and hospitality executive, Kiladjian is known for his commitment to superior customer service that has kept customers returning to his properties. He was most recently General Manager at the Cliff House Resort & Spa in Ogunquit, ME. During his time at the Portland Harbor Hotel, Kiladjian was able to elevate the property’s visibility through events like the hotel’s annual Ice Bar. Designed to celebrate Portland’s long winter and give back to the community through charitable donations, the event has raised more than $75,000 for local organizations over the years. Kiladjian is also responsible for leading the hotel to its well-respected position in the Portland community. Kiladjian is a board member of the Piper Shores retirement community and President and Founder of the Armenian Cultural Association of Maine. He previously served as a board member of the Greater Portland Convention and Visitors Bureau, Portland Downtown and the city of Portland business advisory committee.
Hotelschools.com