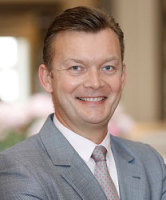 Five-star hotel, Corinthia London, announces the appointment of Stéphane Trycionka, as Director of Sales & Marketing. With 11 years of experience in the luxury hotel industry, this role will see Stéphane in charge of driving international sales to the flagship Corinthia Hotels’ property. Stéphane joins us from his role as Director of Sales & Marketing at the Hôtel Métropole Monte-Carlo in Monaco, where he was responsible for improving the performance and global exposure of the hotel. His international profile and wealth of contacts are a tribute to his time spent working for a number of other prestigious hotels, including the Hôtel Fouquet’s Barrière, The Oetker Collection & Le Bristol, Hôtels Plaza Athénée & Le Meurice. In addition to his hospitality background, Stephane also has extensive experience in communications. He worked as internal communications manager at YSL Beaute in France, the perfume and cosmetic division of the GUCCI GROUP, today part of L’OREAL.