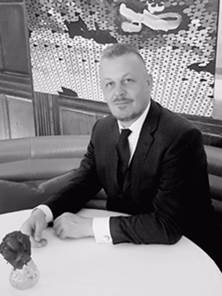 Blakes Hotel, one of the world’s first luxury boutique hotels, is pleased to announce the appointment of Markus Savage as Food and Beverage Director. Effective as of 21st May 2017, Markus will oversee all of the food and beverage operations at the South Kensington establishment, encompassing the recently relaunched Blakes Restaurant and underground bar, Blakes Below, as well as the newly designed courtyard, The Garden at Blakes. Bringing over 20 years of experience in the restaurant and hospitality industry to the role, he has received various accolades along the way, and gained invaluable experience during his time at some of the most iconic restaurants in London as well as the five-star hotel industry. Markus joins Blakes Hotel following his most recent role as General Manager of HIX Mayfair. Before then he held the title of Events Operations Manager at The Holborn Dining Room at Rosewood Hotel. Markus was responsible at a senior management role to a 200 cover dining room, as well as a separate 30 cover terrace and takeaway deli. In his earlier career Markus built a strong operational background in the food and beverage sector holding positions at The Ivy and J Sheekey’s. He later spent eight years working as Restaurant Manager at The Wolseley and The Delaunay, both of which received critical acclaim under his leadership for outstanding service. As F&B Director, Markus Savage will bring his wealth of experience and innate charm to lead Blakes Hotel’s in-house Restaurant and Bar with impeccable service and detail. Commentating on his new appointment, Markus says ‘I am incredibly excited to assume my role at Blakes Hotel, an establishment that is full of so much history and upholds such a notable reputation in London.’

Design hotels™ represents and markets a hand-picked collection of more than 160 hotels in over 40 countries across the globe. Established in 1993, as the first of its kind, the company offers unparalleled specialist knowledge from conceptual branding through to market trend consultancy and international representation.
more information
Recent Appointments at Design Hotels

23 August 2018 — Design Hotels™ appoints Allison Barclay to represent their global collection of independent hotels, in Australia and New Zealand. Design Hotels represents and markets a select collection of more than 300 hotels in 60 countries and 200 destinations around the globe.
read more

20 August 2018 — Hotel Amapa, the first hotel of its kind opening in early 2019 in the historic old town of Puerto Vallarta, is pleased to announce that Alessandro Stifani has assumed the role of General Manager. With over 20 years of experience in the hotel industry, Stifani brings to the hotel a wealth of exceptional experience in the hospitality industry.
read more