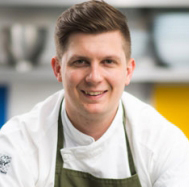 Ben Abercrombie has been appointed head chef of the new 177-bedroom Apex City of Bath hotel, which is due to open on 1 August. His most recent roles have been at the Queen’s Arms in Corton Denham, Somerset, which achieved a Michelin Bib Gourmand, and the Bath Arms in Horningsham, Wiltshire. Earlier in his career, 26-year-old Abercrombie worked for Mitch Tonks at the Sea Horse in Dartmouth, Devon, and for Mark Hix at Hix Soho in London. Abercrombie said his ambitious at the Apex City of Bath will be to build a kitchen that will “create wonderful experiences” for diners.
Recent Appointments at Apex Hotels

24 September 2018 — A brand new General Manager has joined the team at the city's largest hotel - Apex City of Bath Hotel. Experienced hotelier, Michael Musgrave, will lead the team at the four-star property in the heart of Bath.
read more

30 July 2012 — Deborah Green has recently been appointed as the new Director of Sales MICE for the Apex Hotels group. Her role is to look after the Meetings Market across the UK for all 8 Apex Hotels focusing primarily on conference agents.
read more