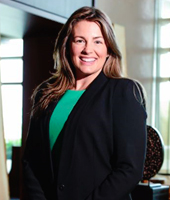 The Ritz-Carlton Bal Harbour, Miami announces the appointment of Nikki Berry as Hotel Manager for the 18-story luxury resort. A passionate leader with more than a decade of knowledge and expertise in luxury hotels, Nikki will oversee all facets of the resort, including hotel operations, property amenities and guest services. Nikki joins The Ritz-Carton from the 1 Hotel South Beach where she was Director of Rooms. In her role, Nikki oversaw eight operational departments and led her teams and the hotel to unparalleled results in guest engagement, increasing scores ten points year over year. Prior to her role at the 1 Hotel South Beach, she served as the Assistant Rooms Executive and Director of Housekeeping for The Ritz-Carlton, Key Biscayne (2012-2016). During her tenure, she was also selected to serve on the property opening teams for: The Ritz-Carlton, Aruba; The Ritz-Carlton, Rancho Mirage; The Ritz-Carlton, Bal Harbour, Miami; as well as The New York EDITION. Nikki graduated Cum Laude earning a Bachelor of Science degree in Hospitality Management with a dual minor in Spanish and Business from Auburn University. Prior to her position with The Ritz-Carlton Hotel Company, L.L.C., Nikki first began her career in hospitality in 2005 with the Capella Hotel Group at The Hotel at Auburn University where she served in banquets, before going on to various Rooms Operations positions within the company. She later transitioned into her first senior-level management role at Sandestin Golf & Beach Resort in Destin, FL. where she served as Director of Front Office and Director of Housekeeping.
Hotelschools.com