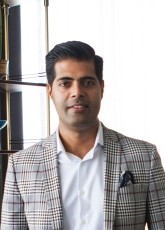 Thompson Nashville welcomes Akshay Bahl as the new general manager of the hotel. In this roles, Bahl’s focus will be overseeing the hotel’s operations, as well as leading strategic marketing and brand development. With more than 10 years of experience as a General Manager in the hospitality industry, this appointment marks Bahl’s return to the Two Roads Hospitality family after most recently serving as general manager at The Hollywood Roosevelt in Los Angeles. Prior to this appointment and his role at The Hollywood Roosevelt, Bahl served as the general manager at a variety of properties within the Thompson Hotels portfolio. Bahl was highly involved in the pre-opening and opening phases at Thompson Playa Del Carmen, Thompson Beach House and Thompson Miami Beach. He additionally worked at the Domain Hotel where he was named General Manager of the Year by Commune Hotels & Resorts (now Two Roads Hospitality).
Hotelschools.com

23 July 2019 —  With nearly 15 years of leadership experience in the luxury travel sector—including a background working with Mexican resorts—Montgomery brings her passion for travel, industry expertise, and valuable knowledge of Mexico's hospitality landscape to the Thompson Zihuatanejo team.
read more

3 April 2019 — Hugo Corrales brings more than two decades of luxury hospitality experience to Thompson Playa del Carmen and Thompson Beach House as Director of Sales and Marketing. Based out of Miami, FL, Corrales has a deep-rooted understanding of the marketplace, having held roles in both the local and national sales arenas.
read more
More from Thompson
Map
Advertisements
Never miss a story again
Sign up for the HN360 daily newsletter
Media Kit – Submit Content
Advertisement
Advertisements