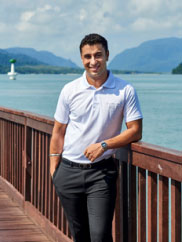 Abhay Singh is appointed Director of Food & Beverage for The Westin Langkawi Resort & Spa. In his new role, he will be managing the overalls operations and services of all F&B venues and the resort's banquets.

Abhay attended the University of Huddersfield and obtained a BA (Hons) in Hotel Management. His dedication and passion for the hospitality industry have led him to garner experiences of more than 9 years in various hotel brands in India. Abhay began his career in 2008 as a part of the Voyage Trainee Management Programme with Marriott International. The hunger to attain in-depth knowledge in the hospitality, which is ever so evolving, has brought him to quickly learn the ropes of operations. His first breakthrough was when he was employed as Director of Events, Renaissance Mumbai Hotel & Convention Centre in 2013 where he was responsible for the planning and executing of some of Mumbai's largest scale MICE conferences, high net-worth weddings and exhibitions. He later joined the JW Marriott Mumbai Sahar as a pre-opening team, which allowed him to sharpen his leadership skills in Events and Banquet Operations. He continued to scale new heights with the launch of Marriott India's first 'Meetings Imagined' concept – a curated and people-inspired tool, highlighting the best in meeting expertise and trends; along with some of the city's high profile weddings that included industrialists, corporates and politicians alike.

Prior to his new position, Abhay was the Director of Food & Beverage at Goa Marriot Resort & Spa. He was instrumental in implementing key operational strategies to maximize revenue, profit growth, inventory and cost control, ensuring outstanding customer service, and improving guest and employee engagement. During his time at Goa Marriott Resort & Spa, Abhay was also responsible for driving the property and its food and beverage venues to amongst the top 5 in the state on Tripadvisor metrics and initiated a trending hashtag on social media platforms to make it one of the most 'positively mentioned' hotels for its superlative food quality and service. During his tenure, he played an integral role in the planning and execution of a 5-day gala affair with high profile wedding planners, which received resounding success.

A firm believer in innovation, Abhay is constantly creating new experiences for his guests and for this; he was recognised at the Marriott Global Headquarters in Bethesda, Maryland where he was awarded "Renaissance Global Leadership Diamond in 2013, Global Event Management (GEM), Marriott International – a high honour that placed him as the global brand winner for Events within the organisation.

Apart from this, he has been a team member across full-time task force stints and pre-opening team roles across Food & Beverage, Events, and Catering and Front Office departments in hotels.

21 January 2020 — In her new role, she will be overseeing the hotel's room, meetings, and convention businesses. She has more than 20 years of experience with Marriott International, having started her career with The Ritz-Carlton Millenia, Singapore.
read more