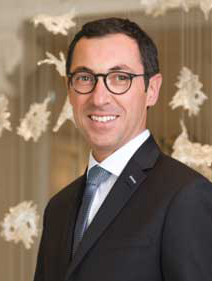 At 42, Nicolas Combes is entrusted with the Food and Beverage Department at The Peninsula Paris and becomes the custodian of its gastronomic offer. Born in Poitiers, graduated in Marketing and Hotellière Management in La Rochelle, Nicolas has been working for more than fifteen years in the international luxury hotel industry. He climbed the stairs one by one, multiplying his experiences in renowned institutions in New York, Bora Bora and Paris where he served as Assistant Director of Restoration at Four Seasons George V for more than two years. In contact with the greatest stars - Philippe Legendre, Eric Briffard, Christian Le Squer or Joel Robuchon ... he shows tenacity in his managerial functions to rise to the top. Throughout his career, Nicolas develops a significant interest in various cultures. Working in Europe, the United States and the Pacific Islands has given him a solid cultural experience, helping him to understand the desires of the most demanding high-end travelers from all over the world, as well as his collaborators from diverse backgrounds. Man of the field and public relations, guarantor of the culinary image of the establishment and the osmosis between the various points of restoration and the Direction, he will be the new conductor of an inspiring symphony of a hundreds of talented employees, sharing its strategic vision of the business, adapted to the creative line of each restaurant of the hotel and their image and financial objectives.

Passion, talent and experience combine to focus on detail and creativity, wishing to combine luxury with a dynamic and modern offer in a historic setting.