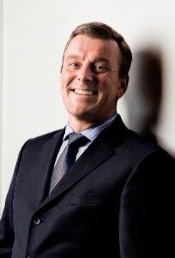 Harcourt Developments is pleased to announce the appointment of Thomas Orchard as the new Managing Director of Carlisle Bay, Antigua. In his new role, Thomas will be responsible for overseeing the management of the 87-suite luxury Caribbean resort, which is part of The Harcourt Group.

Thomas, a seasoned hotelier, brings many years of experience in luxury properties to his new position, including COMO Hotels and Resorts, where he has been Regional General Manager for the past 17 years. During his time at COMO, the company grew from three to fourteen handpicked and individually curated properties located across the globe, of which Thomas was responsible for the operation, development and strategy of two London five-star hotels: The Metropolitan on Park Lane and The Halkin in Belgravia.

After graduating from Middlesex University, Thomas spent his early years in the Caribbean working for Royal Caribbean Cruise Line. Returning home, he joined Rock Resorts and the preopening team for Hanbury Manor, a five-star Country House Hotel in Hertfordshire as Front Office Manager, before moving to London as the Executive Assistant Manager at The Berkeley, then part of the Savoy Group. In 2000, he was recommended to the Ong family and subsequently moved to COMO Hotels and Resorts. While at the helm of the two London hotels, Thomas supported the opening of many of the new properties, in particular in Bali, Bhutan and the Maldives and also gained valuable experience in the Caribbean through his involvement in Parrot Cay in the Turks and Caicos Islands.