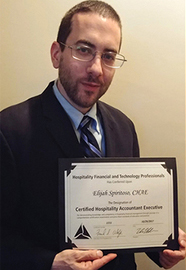 Hospitality Financial and Technology Professionals (HFTP®) will honor Elijah Spiritoso, CHAE as the 2018 Certified Hospitality Accountant Executive (CHAE®) of the Year at its upcoming Annual Convention this October. The CHAE of the Year award honors the individual that scored the highest on the CHAE certification exam within a given year. HFTP's Annual Convention will be held from October 24-26, 2018 at the Omni Louisville Hotel in Louisville, Kentucky USA - online registration is open now.

Spiritoso started in hospitality as a busboy for a local Philadelphia restaurant, and then became a server at the downtown Hilton Garden Inn in Philadelphia while in high school. Spiritoso graduated from Temple University in Philadelphia with a Bachelor's in Business Administration, where he was a finance major. He continued to work as a food server in both a-la-carte and banquets, working for many well-known restaurants, caterers and hotels in the area. One Five-Diamond rated hotel, The Rittenhouse, became Spiritoso's main employer, until one day he was offered a position to become the hotel's new income auditor. He was quickly promoted - based on his ability to automate and streamline processes - to condominium accountant then to staff accountant, working directly under the CFO. After many years, he became a controller for GF Management, then a restaurant group. Spiritoso now works as the controller for Frog Commissary, the exclusive in-house food provider for The Franklin Institute.

"The CHAE certification was very helpful in obtaining my new position, as it showed my willingness to continue to stay educated on the fundamental industry knowledge," said Spiritoso. "Employers need to trust accountants at the executive level, so being a CHAE gives added confidence that I am managing the business properly and staying continually educated on the latest industry trends. Every hospitality accounting professional would greatly benefit from studying and retaining the knowledge covered while obtaining a CHAE - it shows that you are a true professional that is serious about your career and future.

"I would like to personally thank everyone at HFTP that worked hard to make the CHAE certification possible, and a special thanks to HFTP Certification Manager Robin Bogdon for guiding me through the process," Spiritoso continued. "I also want to thank all of the other CHAEs out there every day working hard to represent the ideals of the certification. I am truly humbled and honored to be the CHAE of the year and will wear the honor with pride throughout my entire career."

The CHAE professional designation is an industry designation showing competency in the area of accounting, and is acknowledged throughout the hospitality industry as it elevates the professionalism of both the recipient and the industry. More than 1,500 hospitality accountants, from several countries, have earned the CHAE designation through HFTP since the certification program began in 1981. A new CHAE exam is now available, and features a more global finance focus. HFTP also administers the examination and awards the Certified Hospitality Technology Professional (CHTP®).

HFTP is the professional non profit association for financial and IT personnel working in hotels, resorts, clubs, casinos, restaurants, and other hospitality-related businesses. The association provides continuing education and networking opportunities thousands of members and stakeholders globally.
more information
Recent Appointments at HFTP

5 November 2019 — The 2019-2020 Global Executive Committee and Board of Directors for Hospitality Financial and Technology Professionals (HFTP®) have officially begun their term at the start of this month. The association leaders represent a wide variety of segments within the hospitality industry, including: clubs, consulting, hotels, finance, technology and more.
read more