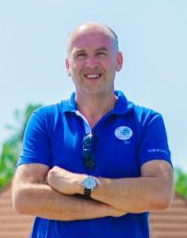 ROBINSON Club Maldives has announced the appointment of Bert Goebel as the new general manager. Born and raised in Germany, Bert chose a career in the hospitality industry at an early age, and today considers himself as a "cosmopolitan in the industry" with nearly 30 years of experience in high-end hotel, resort and cruise ship business worldwide.

Bert started his career in the industry in 1989 on the culinary side and gained his postgraduate degree in Hospitality and Culinary Art after which he worked as the Executive Chef in well-known hotels in Europe and Asia. In 2006, Bert joined the international cruising industry and played a substantial part in developing and establishing one of Germany's major Cruise Lines.

After his MBA in Hospitality and Tourism, Bert continued his career into top management, and from 2004 until 2018 had served in different levels and positons such as F&B Director, Hotel Manager and General Manager in high-end five- and six-star international established companies all around the globe.

8 April 2019 — Anna Laestadius has been appointed as Chief Creative Officer of the Hanover, Germany based TUI Group, overseeing the global development of the TUI brand. Her new role's responsibilities include the Center of Excellence for Brand Marketing & Insights in the Nordics as well as the company's development of brand and marketing campaigns.
read more