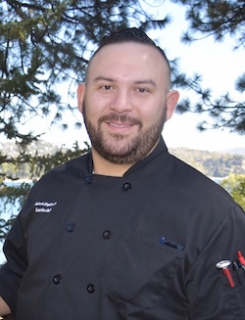 Pulido will oversee all operations of the signature restaurant BIN 189 and its Magnum Private Dining Room, as well as be in charge of catering, banquets and weddings. He will be creating new menus for BIN 189 that reflect his penchant for contemporary American steakhouse comfort food including seafood and vegetarian/vegan options - all prepared with modern twists and inspired by the sweeping lakefront vistas seen from the handsome dining room and its elegant birch paneled lounge. There will be an updated wine menu focusing on California wines and offering regional craft brews on tap. In addition, Pulido will be developing separate menus for BIN 189's Magnum Private Dining Room, a distinctive venue for enjoying celebrations, board dinners and special occasion dining.

Prior to joining the team at Lake Arrowhead, Pulido was executive chef at Doubletree Hotel San Bernardino for four years. Previous to that, he served as executive chef/dietary manager at Kindred Hospital in Riverside, Calif., and was sous chef at Riverside Marriott in the beginning of his career. He graduated with an Associate of Arts degree from the International Culinary School at Art Institute Inland Empire and has served as president of the American Culinary Federation Southern California Inland Empire Chefs & Cooks Association since January 2017 and a member since 2008.