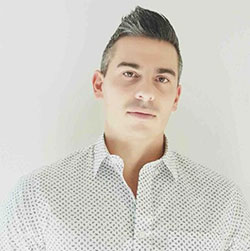 Based in New York City and bringing more than 15 years of experience in the hospitality industry to the role, Mitropoulos will be responsible for providing strategic leadership, guidance and direction on all new and existing concepts and initiatives. He will also lead the charge in the creation, implementation and daily monitoring of standard operating procedures and structure for all food and beverage outlets, attaining the highest standards and efficiency, at Dream Hotel Group.

A graduate of Arizona State University, Dimitri began his career in 2003 as co-founder, owner and managing partner of several independent restaurants and nightclubs in Arizona and Detroit, before joining TAO Group in Las Vegas in 2011, where he held multiple leadership positions, including General Manager for Marquee Day Club, TAO and LAVO. He joined sbe Hospitality Group as Director of Operations in 2014 and was responsible for the restructuring of sbe's dining and nightlife venues in Miami, including Hyde Beach, Hyde Lounge, Hyde American Airline Arena, SLS Pool and Beach Front Property. Dimitri returned to TAO Group in 2016, where he most recently served as Director of Operations, overseeing the pre-opening development and launch of Avenue, The Highlight Room and Luchini Pizzeria & Bar, as well as the hotel lobby bar and in-room dining operations, at Dream Hollywood.

Dimitri also has a wealth of knowledge and expertise in developing large, high-profile events and VIP activations at Miami Music Week, Sundance Film Festival and Electric Daisy Carnival, as well as The Chelsea Ballroom, a flashy, 40,000sqft concert and events venue at The Cosmopolitan of Las Vegas.

With 19 hotels open today and another 20+ locations in various stages of development, Dream Hotel Group is on track to triple its existing portfolio by 2022. Today's announcement signals another exciting milestone in the continued growth and evolution of the company and its portfolio of lifestyle brands.

24 January 2020 — Renowned hotel brand and management company Dream Hotel Group has announced the appointment of Leiya Cohen as General Manager at Dream Midtown. In this role, Leiya is responsible for overseeing all aspects of hotel operations at the Dream Hotel brand's original location.
read more

22 January 2020 — Celebrated hotel brand and management company, Dream Hotel Group is pleased to announce the promotion of Kanvar Singh to Vice President of Operations, effective immediately. In this role, Singh will be responsible for successfully leading the operations and lifecycles of three iconic Dream Hotel Group properties in New York - Dream Midtown and The Time New York in Manhattan and The Time Nyack in the Hudson Valley - as well as Unscripted Durham in North Carolina and Heritage House Resort in California.
read more