Appointed Director of Food and Beverage
At The Four Seasons Hotel Doha, Qatar 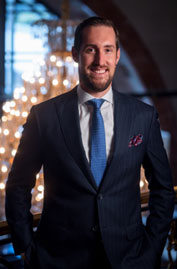 Barber was raised in the United States and moved to Germany in 2006 to broaden his knowledge of wine at a wine school in Koblenz. He later received his certification from Master Sommelier Association in Aspen, Colorado.

In addition to working as the Director of F&B at Four Seasons Hotel The Westcliff Johannesburg in South Africa, Barber also has experience in banquet and restaurant management.

Barber is a graduate of Johnson and Wales University in Providence, Rhode Island and holds an Associates and a Bachelor's Degree in Culinary Arts and Food Service Management