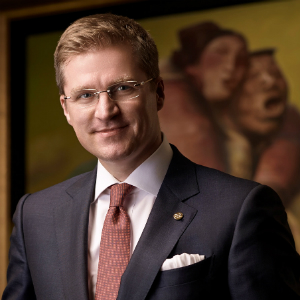 Following his robust success at the company's flagship hotel, The Langham, London, Bob van den Oord will take on a new leadership role on behalf of Langham Hospitality Group as Regional Vice President, Operations - Europe, Middle East and the U.S.

Mr. van den Oord will continue to be Managing Director of The Langham, London, a hotel he has led to the recent success of being awarded Five Stars by Forbes Travel Guide after spearheading a historic three-year renovation. In his newly expanded role, Mr. van den Oord will now also be responsible for maximizing both brand awareness and long-term financial growth of current and future hotels in his regions, as well as providing effective leadership for the individual hotel teams and ensuring that they are aligned with Langham brand standards, culture and values.

In addition to The Langham, London, that existing portfolio consists of The Langham, Chicago; The Langham, New York, Fifth Avenue; The Langham Huntington, Pasadena and The Langham, Boston, which will undergo a multi-million dollar renovation, resulting in a newly re-positioned hotel in 2020. As part of the brand's expansion within the U.S., van den Oord will also be instrumental in the opening of The Langham, San Francisco, planned to debut in the burgeoning SoMA district of San Francisco, in a new building designed by the legendary Renzo Piano, before 2023.

Born in The Netherlands, Mr. van den Oord has enjoyed an exceptional track record in senior hotel management positions for luxury hotels in various regions. Prior to his current roles, van den Oord was previously Vice President of Sales & Marketing for Langham Hospitality Group, after which he held a dual position of Managing Director at The Langham, Hong Kong and Vice President Brands (Global) for Langham Hospitality Group. His more than 20 years of experience has been earned building and driving brand awareness for hospitality brands on three continents (North America, Europe and Asia). Under his leadership, The Langham, Hong Kong was also named a five star hotel by Forbes Travel Guide after an extensive multi-million dollar refurbishment program and the signature Chinese restaurant T'ang Court attained three Michelin stars. Mr. van den Oord will continue to be based in London, but will travel frequently to the regions in which he will oversee operations.

Langham Hospitality Group encompasses a family of distinctive hospitality brands which include hotels, resorts, residential serviced apartments, restaurants and spas, located on four continents. It takes its name from the legendary Langham in London which was opened in 1865 as Europe's first Grand Hotel.
more information
Recent Appointments at Langham

19 May 2020 — Veteran luxury Marcel Holman N.A. has been appointed Managing Director of The Langham, Hong Kong and Regional Vice President, Operations - China for The Langham Hotels and Resorts where he will be driving the strategy, operations and processes for all China hotels under the luxury brand.
read more

24 February 2020 — The Langham, Sydney has announced the appointment of Stephen Lech as the new Executive Chef. In this role, Stephen will lead the culinary programme for all aspects of the hotel from banquet events and weddings, the hotel's cocktail venue; Observatory Bar and the recently opened luxury buffet, interactive dining restaurant; Kitchens on Kent.
read more