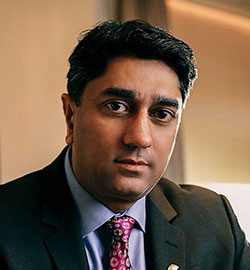 With more than 22 years of experience in the hospitality industry and a solid background in hotel operations, Karan previously served as General Manager at The Ritz-Carlton Pacific Place, Jakarta before joining Mandarin Oriental, Taipei. Prior to that, he was General Manager of JW Marriott Hotel Jakarta and worked at several Oberoi Group hotels.

Karan is passionate about enhancing guest experiences and nurturing his talented team at the only Forbes Five-Star property in Taipei. Diligent and enthusiastic, he is committed to maintaining Mandarin Oriental, Taipei's reputation for excellence with local guests and international travellers alike, delivering luxury service with an unparalleled sense of place.

Born in New Delhi and raised in India, Karan holds a Bachelor's degree in Commerce from Delhi University and a post-graduate Diploma from The Oberoi Centre of Learning and Development, Delhi. He is a fan of contemporary art, culture and opera and in his leisure time, enjoys playing cricket, badminton and travelling with his family.