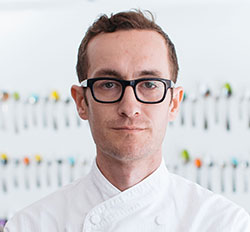 Born and raised in a small town in Louisiana, Executive Chef Logan Stephenson brings over 16 years' experience to his role at Panzano.
Chef Logan's culinary career takes inspiration from his southern upbringing. Weekend family dinners were a time to gather around the table to enjoy heartfelt conversation while feasting on local fish or game caught by Chef Logan's grandfather. This idea of the dinner table serving as a unifier, a place that both embraces and celebrates community, fueled his passion to become a chef.

After moving to Arizona and s pending a few years working in a variety of industries ranging from manual labor to communications, Chef Logan decided to follow his passion and enroll in culinary school. In 2003, he graduated from Scottsdale's Le Cordon Bleu College and began his career working in some of Arizona's most reputable kitchens.
After spending several years serving as a pasta apprentice at FiAMMA under the watchful eye of Michelin-starred Chef Michael White, Chef Logan went on to work at several other esteemed Arizona restaurants, including Circa 1900 and James Beard nominee, NOCA.

Chef Logan soon found his way to San Francisco where he accepted a position with the Del Fina group and further honed his culinary skills under Chef Anthony Strong. During his time with the Del Fina group, Chef Logan assisted opening several Italian restaurants where he helped refine menus to reflect greater simplicity and authenticity- a cooking philosophy he still practices today.

Following his time in San Francisco, Chef Logan moved back to the desert and joined Kimpton Hotels & Restaurants at Blue Hound Kitchen and later as the Executive Chef at SaltRock in Sedona.

As Executive Chef of Panzano, Chef Logan is looking forward to refining the menu to honor the simplistic and authentic flavors of Northern Italian cuisine. Guests can look forward to revamped menus, seasonal events such as whole animal roasting and playful cooking classes that incorporate his love of cycling.

In his free time, Chef Logan enjoys spending time with his girlfriend, Karen, and their Queensland heeler, Olivia, also known as Black Olives as she is a bit salty. As a cycling enthusiast, Chef Logan is gearing up for Chef Cycle, a three-day, and 300-mile race to raise money for No Kid Hungry.