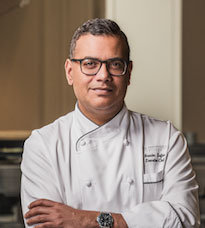 The Peninsula Chicago is pleased to announce the appointment of Executive Chef Baasim Zafar, a native of England with more than 25 years of experience in restaurants and luxury hotels in the United States, London and Saudi Arabia. Chef Zafar will oversee all Peninsula restaurant kitchens for The Lobby, Shanghai Terrace, Pierrot Gourmet and Z Bar, as well as banquets, in-room dining and pastry kitchen operations.

Classically trained at Le Cordon Bleu London and schooled at the University of Houston's Conrad N. Hilton College of Hotel and Restaurant Management, Chef Zafar draws culinary inspiration as much from his guests and his world travels as from the fundamentals of seasonality and freshness that ground his work.

Most recently, he led culinary operations at The Ritz-Carlton, Chicago that included the launch of Italian steakhouse Torali and accompanying bar, rooftop lounge and café.

Chef Zafar was born in Burton-upon-Trent, England and reared in London, where he spent much of his time in the company of his grandmother, watching and helping her cook traditional Indian food. By 7, he knew he wanted to be a chef. At 14, he took his first job as a dishwasher at the Grosvenor House Suites in London.

His career then took him across the pond to Trader Vic's in Chicago's Palmer House Hilton and eventually to leading the kitchens at such storied hotels as The Pfister Hotel in Milwaukee, The Drake in Chicago and The St. Regis New York. In 2015, he joined The Ritz-Carlton to help open The Ritz-Carlton, Jeddah in Saudia Arabia before moving back to Chicago as executive chef of The Ritz-Carlton, Chicago.

Joining The Peninsula Chicago brings to the fore Chef Zafar's long-held admiration for the brand and its global mystique. He recalls visiting Hong Kong with his family as a boy and standing, awestruck, in front of The Peninsula Hong Kong and its fleet of Rolls-Royces for the first time—a scene he would repeat every time he returned to the city. Someday, Chef Zafar told his father, he would go inside.