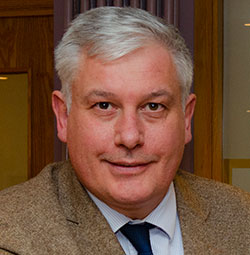 Leading international hotel operator Macdonald Hotels & Resorts has announced the appointment of an award-winning member of staff to oversee Macdonald Aviemore Resort. Paul Bayliss MBE has returned to the company in the role of Managing Director of the renowned Macdonald Aviemore Resort which employs up to 350 people during peak season. During almost a decade in the hotel industry, Paul has managed a selection of large, high profile hotels and resorts and was awarded UK Independent Hotelier of the Year 2018 for his continued work in service excellence and people development. Other accolades include helping one of his hotels gain AA Hotel of the Year and, during his time at The Macdonald Manchester, receiving a scholarship through The Master Innholders to attend the General Manager's Program at Cornell University, New York. Paul also served for 24 years in the British Army progressing from apprentice chef all the way through to commissioned officer. He has worked all around the world and was part of the UK Army Chef Team which won a World Championship at the Berlin Internationale Kulinaire Olympiade culinary Olympics in 1995. In 2006, he was awarded an MBE in recognition of many years of work developing the next generation of hospitality professionals and helping personnel further their careers after leaving the military.

26 June 2017 — Johan Scheepers has been appointed as the new Regional General Manager for Macdonald Hotels & Resorts in the North West. With 20 years’ experience in the hospitality industry, Johan will be based at the Macdonald Manchester Hotel & Spa, the largest 4-star hotel in Manchester.
read more

13 June 2017 — Keith Pickard has been named as group director of golf, leisure & spa by Macdonald Hotels & Resorts. He steps up from his previous role of director of golf at the UK independent hotel chain. Pickard will oversee each of the lifestyle departments of the 45-strong hotel group, including 21 spas.
read more

14 March 2017 — The Lymm Hotel, near Warrington, has appointed Carlie Shiels as its new General Manager who, with over 15 years in the hospitality industry, will be responsible for managing the historic 62 bedroom property.
read more
More from Macdonald
Map
Advertisements
Never miss a story again
Sign up for the HN360 daily newsletter
Media Kit – Submit Content
Advertisement
Advertisements