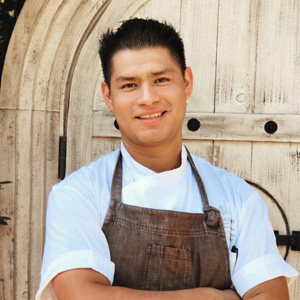 Four Seasons Hotel Seattle welcomes Emmanuel Calderon as Executive Chef where he is responsible for overseeing all culinary programs in the downtown hotel including Goldfinch Tavern, catering and events, in-room dining, and INFINITY pool + bar.

A story often told, Calderon began his cooking career by becoming a kitchen apprentice. His talent was clear from the beginning and he was afforded the opportunity to use his extra time in the kitchen to learn directly from the chefs about cooking. Calderon then moved on to luxury hotels around his hometown of Cancun.

As he grew his career, Calderon participated in hotel openings and culinary competitions around the country, culminating in Joven Chef Mexicano, where he was recognised as one of the top 10 best chefs under the age of 30.

Before permanently joining Four Seasons, he was a chef with Holland America, broadening his global palate in Mediterranean destinations such as Italy, Greece and Turkey. Calderon began his Four Seasons journey in 2009 in Dallas, and progressed to Mexico City, Scottsdale and Santa Barbara, where he was most recently as Executive Sous Chef.

Revelling in the fresh ingredients of the Pacific Northwest, Calderon is excited to use local products and incorporate his heritage and various cooking influences. His philosophy of keeping dishes simple and letting the ingredients do the job mirrors Ethan Stowell's, whom Calderon will collaborate with on Goldfinch Tavern.

When not in the kitchen, Calderon loves to hike, mountain bike and garden; and when he's in his hometown, he spends time in the ocean free-diving for his meal with family and friends.