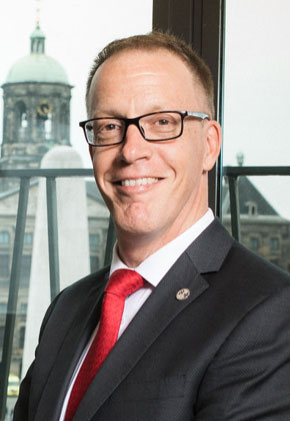 Arne Heuwekemeijer has recently officially welcomed his first guests to NH Collection Amsterdam Grand Hotel Krasnapolsky. The new General Manager took up his duties on 20 May and has extensive international experience in luxury hotels. After years of working in Asia, the last of which as General Manager of the five-star Radisson Blu Hotel Shanghai, Heuwekemeijer says he comes "back home" in Amsterdam. Heuwekemeijer succeeds Herman Klok in his position. Klok continues his career at NH Hotel Group as Regional Director Operations Amsterdam, United Kingdom and Switzerland.

Arne Heuwekemeijer started his career in Food & Beverage at various four and five star hotels in the Netherlands. During his position at Hotel Okura Amsterdam, he was offered an international position. In 2001, he exchanged his position in F&B Management in Amsterdam for a position as Sales Manager in Shanghai. He was promoted to Director of International Sales at the Okura Garden Hotel. Arne has always had the ambition to become General Manager before the age of 40 and he succeeded. At Sofitel Hyland Shanghai he had the opportunity to redesign the entire F&B department and the common areas. Arne has worked for Carlson Hotels for the past ten years. Here he was promoted to General Manager of the five-star Radisson Blu Hotel Shanghai. Arne has held this position since 2012.

Since May 20, Arne has officially exchanged Asia for "home" and has been appointed as the new General Manager of the 451-room NH Collection Amsterdam Grand Hotel Krasnapolsky. "I am really looking forward to taking care of my guests and employees. It is an honor to be able to fulfill this position and to manage this iconic five-star hotel on Amsterdam's Dam, opposite our Royal Palace, "says Heuwekemeijer. "Together with my employees, we always go the extra mile for our guests and contribute to a unique and enjoyable experience, both in the hotel and in Grand Café Krasnapolsky, Bar The Tailor and Restaurant The White Room *.