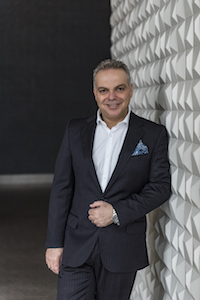 The Ritz-Carlton, St. Thomas is pleased to announce the appointment of Akis Neocleous as General Manager. Neocleous will oversee the reopening of the resort later this year and head all operations. Most recently, he served as the General Manager of the W Panama, which opened to great fanfare under his direction.

A native of Cyprus, Neocleous is a graduate of the Glion Institute of Higher Education in Switzerland. He began his career with InterContinental Hotels & Resorts in Venezuela and has since worked at upscale hotels throughout the Caribbean and Latin America. His extensive experience in luxury includes positions with Relais & Chateaux and Leading Hotels of the World properties.

Much of Neocleous' experience has been with Mexico's top luxury properties, including the acclaimed Las Ventanas al Paraiso, a Rosewood Resort, recognized for its extraordinary guest experience. After several years in the competitive luxury market of Los Cabos, he took on the challenge of joining a small independent hotel in Panama City, the Grace Panama, where he maintained the No. 1 position on TripAdvisor from 2014 through 2017.

In 2017, Neocleous joined Marriott International as the opening General Manager of the W Panama, the brand's entry into the Central American market. In this position he led the team through opening and established the hotel as the place to be for entertainment and culinary experiences in Panama City.

Akis and his wife Cecilia have two children, whom he enjoys spending his spare time with. Akis also has a passion golf and cooking - he is even writing his own cookbook based on his travels.