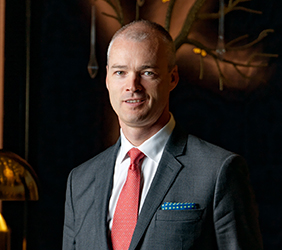 he Ritz-Carlton, Astana has welcomed Tony Coveney as the new General Manager of the hotel.

With more than twenty years in hospitality and considerable exposure to luxury hotel brands, Tony brings an impressive resume of experience to The Ritz-Carlton, Astana which in June this year celebrated its two year anniversary.

A native of Ireland, Tony was born and raised in Cork and educated at one of the country's leading hotel schools in Galway. Having completed graduate training with Conrad Hotel s both in Belgium and in Ireland, he joined Four Seasons Dublin in 2003. For almost ten years in Dublin he filled executive roles in Sales and Marketing, Rooms operations and Food and Beverage. In 2013 he transferred to Four Seasons Hotel Sydney, Australia as the Director of Rooms in what is the company's largest property globally.

Following a high octane two years down under, Tony accepted a promotion and transfer as Hotel Manager of Four Seasons Hotel Riyadh at Kingdom Center. His four years in Saudi Arabia culminated with a posting as acting General Manager since June 2018. Also during this period, Tony was selected to lead a pre-opening project in Athens, Greece as acting General Manager with Four Seasons Astir Palace Hotel.

Tony is highly socially engaged and supports several Irish charity projects. As a young adult he completed a circumnavigation of the world on a small sailing boat to raise awareness and funds for the Chernobyl Children's Projec t in a two year voyage that became known as 'Sail Chernobyl'. He is an active member of Le Chaîne des Rôtisseurs, an international society for gastronomy and was recently the chairman of the Irish Business Network, Saudi Arabia. When not at work, Tony is a busy husband to Gemma and father to sons Harry, Andrew and Charlie.