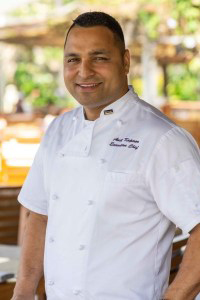 Born and educated in India, Chef Anil began his culinary career as a trainee at Grand Hyatt New Dehli. After showing great promise, he was promoted to the position of Commis Chef in 1999 where he perfected his skills in the preparation of fine dining European cuisine. Chef Anil then enjoyed a brief stint as Chef de Partie at Leela Kempinski Mumbai. This was followed by time as Sous Chef at Grand Hyatt Mumbai, whilst he simultaneously studied for his Bachelor of Arts degree from Delhi University. In an effort to broaden his portfolio, Chef Anil relocated to Australia in 2007 after accepting a position at Novotel Canberra. However, he soon moved into a more senior role as Sous Chef for Crowne Plaza Canberra where he embraced the challenge of greater responsibility. From 2010 to 2017, Chef Anil was the Head Chef for The Hellenic Club of Canberra where he managed banquet kitchen operations for five busy venues. Now as Executive Chef at The Westin Resort Nusa Dua, Bali, Chef Anil is in charge of culinary services for several distinctive restaurants as well as banqueting for events held at the adjacent Bali International Convention Centre. Highly experienced in overseeing busy kitchen environments, Chef Anil is suitably impressed by the comradely and creativity exhibited by his new Balinese team.

27 July 2021 — Hotel Drover, an Autograph Collection hotel, is pleased to announce the appointment of Chris Saputo to the role of general manager at the 200-room rustic-luxe hotel, which opened in March 2021. Representing a forward-thinking approach, General Manager Chris Saputo brings close to two decades of experience to the newly opened Hotel Drover, an Autograph Collection Hotel by Marriott.
read more

23 July 2021 — A renowned name in the hospitality industry, Mr.Kunal Chauhan has been appointed as the General Manager at JW Marriott Mumbai Sahar, city's most favoured luxury business hotel since its launch in 2015.
read more