Appointed General Manager
At The Glasshouse in New York, USA 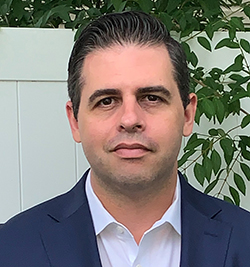 In advance of opening of its 75,000-square-foot glass-enclosed space, currently under construction, Glasshouses announces the hiring of General Manager, Andres Ducoudray. In this newly created position, Ducoudray will oversee the operations, sales, and human resources departments at its new flagship venue, The Glasshouse.

Ducoudray started his hospitality career with positions at Giants Stadium and the Mandarin Oriental New York. In 2005, he became Banquet Manager at the iconic Rainbow Room, working on glamourous events such as the Annual Black-Tie New Year's Eve Gala, the JCCA Celebration of Hope Gala and the Tony Awards. After the temporary closing of Rainbow Room, Andres moved on to Cipriani Wall Street serving as Director of Banquets, overseeing large-scale events. After 6 years at Cipriani, Ducoudray moved back to the Mandarin Oriental New York where he became the first-ever Assistant Director of Banquets, as the brand grew globally, and was promoted to Director of Banquets within six months. In 2015, he returned to Rainbow Room to reopen the venue after a several-year closure. After a much-heralded opening, Ducoudray was promoted to Director of Operations overseeing all banquet operations including Rainbow Room, the Dining Club, and Bar SixtyFive. Throughout his career, Ducoudray has received several accolades including Manager of the Quarter and Manager of the Year at the Mandarin Oriental. Additionally, Rainbow Room received several awards during his tenure, including The Manhattan Hospitality Award in 2019 and the James Beard Foundation Award for Outstanding Service.

Recent Appointments at The Glasshouses