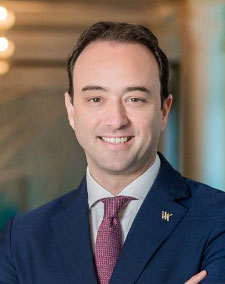 Waldorf Astoria Ras Al Khaimah has promoted Marco Pedna, its director of operations to the role of hotel manager.

Pedna will now "oversee all aspects of the operations and strategic performance" for the property.

With more than 14 years' experience in the hospitality industry, he has worked at several resorts across the world including Conrad Algarve (Portugal) and The Augustine - Rocco Forte Collection (Prague, Czech Republic).

In 2001 Pedna began his career as an assistant F&B manager at Hilton Margarita & Suites (Venezuela) before working his way up to F&B operations manager at Hilton Park Nicosia (Cyprus) in 2003. After holding a number of similar positions across the world he moved to the United Arab Emirates, joining Waldorf Astoria Ras Al Khaimah in 2014.

Marco Pedna (Class of 1999) is a graduate of University of Denver | Daniels College of Business in Denver, Colorado - United States
more information