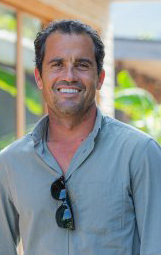 With more than a decade of experience working in the high-end hospitality sector, Dominic brings experience and extensive passion to his new role.

After graduating from Arizona State University with a degree in economics, Dominic decided to pursue his passion and turned it into his lifetime career. Having opened his first hotel at the age of 24 as Director of Nightlife for W Hotels, he has since been a part of five hotel openings.

In the role of Director of Food and Beverage, he headed up luxury properties in the USA, Mexico, Turks & Caicos and Maldives, with respected brands such as COMO, St. Regis and W Hotels.

Dominic was part of teams in two hotels winning the Forbes Travel Guide Stars Award and had the opportunity to handle some of the most outstanding events in his career, like the NBA All-Stars, Miami Music Conference, BPM Festival Mexico and ESPY Awards as well as the Oscars.

Dominic believes in a mindful approach to hospitality and feels that the best way to learn and grow through travel is to first 'seek to understand and then to be understood'.

Moving from the Maldives to Vietnam, he firmly believes he is now right where he is meant to be. The differences in cultures and perceptions seem not to be a challenge but a chance to grow and move forward.

He looks forward to spending time with the hosts at Six Senses Con Dao and learn more about their personal journeys and dreams so he can support and motivate them, and encourage their growth.

26 May 2020 — Six Senses Con Dao welcomes Hannah Loughlin as the new director of sales and marketing. Hannah Loughlin first cultivated her knowledge, leadership and management skills in sales and marketing in 2002 at London's Grosvenor House before going on to join brands such as Design Hotels, and spearheading the field team of prestigious hotels including Sofitel London St James, InterContinental and Anantara, Angkor.
read more