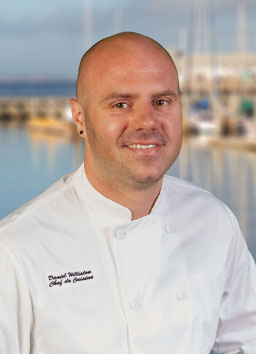 In 2010, Williston began as a line chef at Aubergine in Carmel by the Sea, eventually working his way up to Executive Sous Chef and Chef de Cuisine over his seven years at the fine dining restaurant. He then moved to Los Angeles to assist in opening NoMAd as Sous Chef as well as hotspot Otium, where he was also Sous Chef.

Chef Williston brings his inspirational innovation to all efforts of his expertise within the culinary arts. Williston aims to tempt the taste buds at every visit and enhance Jacks Monterey's reputation for delivering sustainable and locally-sourced California Cultural Cuisine.

Inspired by cooking with his mother at a young age, the passionate Chef Williston fuses his love for seafood with flavors reminiscent of Japanese cuisine. Williston establishes divine taste experiences through premium ingredients and minimalist plating while staying true to his coastal influences.