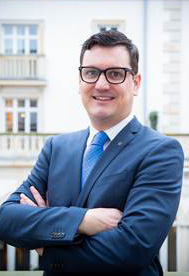 Reporting to Frank Heller, Regional Director of Germany for Rocco Forte Hotels, Steinmaier joins Villa Kennedy from Roomers Hotel in Munich where he was the Hotel Manager and part of the opening team. Prior to this he was Director of Food & Beverage at Hotel Vier Jahreszeiten Kempinski in Munich.

A native German, Steinmaier started his career at the Mandarian Oriental, Munich in 2000 where he trained as a hotel specialist. He studied at Les Roches School of International Hotel Management in Switzerland where he received a Bachelor's in Business Administration in International Hotel.

16 May 2019 — Berlin - The Rocco Forte Hotel de Rome has a new chef: Davide Mazzarella, 31, is responsible for the culinary concept of the five-star superior hotel at Bebelplatz and the in-house restaurant LA BLANCA.
read more

29 March 2019 — Rocco Forte Hotels is pleased to announce the appointment of Franco Girasoli as General Manager of Masseria Torre Maizza set to open May 1 in Puglia. An Italian native, Girasoli brings 30 years of hospitality experience to the new Apulian resort and has excelled at building strong relationships with an international clientele from key markets such as the United States, the UK, Russia, Japan, France and Germany.
read more
More from Rocco Forte Collection
Map
Advertisements
Never miss a story again
Sign up for the HN360 daily newsletter
Media Kit – Submit Content
Advertisement
Advertisements