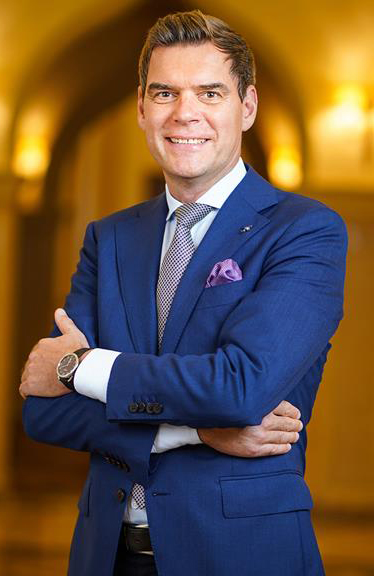 Michael has worked at the luxury hotel before, making a significant contribution to the successful reopening of Hotel Adlon Kempinski Berlin as Food & Beverage Operations Manager from 1997 to 1999; in 2002 he returned to his old haunt for three years as Hotel Manager.

The 52-year-old has had an impressive career in the international luxury hotel industry. He originally trained as a chef at Hotel Atlantic Kempinski Hamburg in 1985, and from then on, he has risen up through the ranks with his passion for fine dining and the hotel business. For example, he responded to the call of the legendary Mandarin Oriental Bangkok, Thailand, where he was appointed Executive Assistant Manager in 1999. Later on, after the successful opening of Kempinski Hotel Barbaros Bay Bodrum in 2005 and Kempinski Hotel Adriatic Istria in 2009, Michael Sorgenfrey took on a new challenge and moved to Abu Dhabi in 2010 as General Manager of the Grand Millennium Al Wahda Hotel and Residence with 840 guestrooms. In 2012, he was appointed General Manager of Palace Downtown Dubai, which belongs to Address Hotels & Resorts. His next position was Managing Director of RIMC Deutschland Hotels & Resorts, a subsidiary of RIMC International Hotels & Resorts GmbH, and there he was responsible for the operational and strategic management of 15 hotels in Germany. In autumn 2019, he again followed the call of Kempinski Hotels and became Vice President Operations, Middle East & Africa.