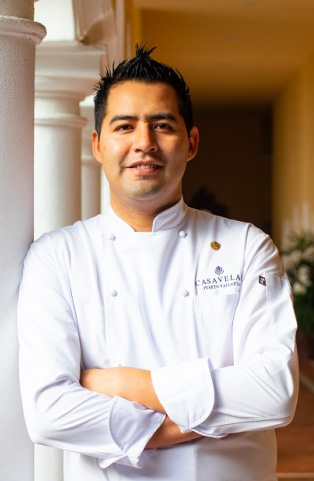 Isaac Esparza has been named Food & Beverage Manager and Executive Chef of Casa Velas, an adults-only boutique hotel and private ocean club in Puerto Vallarta, Mexico. In his new role, he is responsible for the hotel's two restaurants - the AAA Four Diamond restaurant Emiliano and the private Ocean Club; 24-hour insuite dining program; and culinary experiences for guests. The appointment is effective immediately.

For the past 12 years, Esparza has held various positions on the culinary team within Velas Resorts. Most recently, he served as Executive Sous Chef of sister property Grand Velas Riviera Nayarit which houses four AAA Four Diamond restaurants. Prior to, he was Head Restaurant Chef of Sen Lin restaurant at Grand Velas Riviera Maya on Mexico's Caribbean Coast. Prior to joining Velas Resorts, Esparza has worked at the Laguna Grill and Iki restaurants in Cancun. He studied Culinary Arts in Lécole des Chefs and has been decorated as a member of the Culinary Academy of France in Mexico.