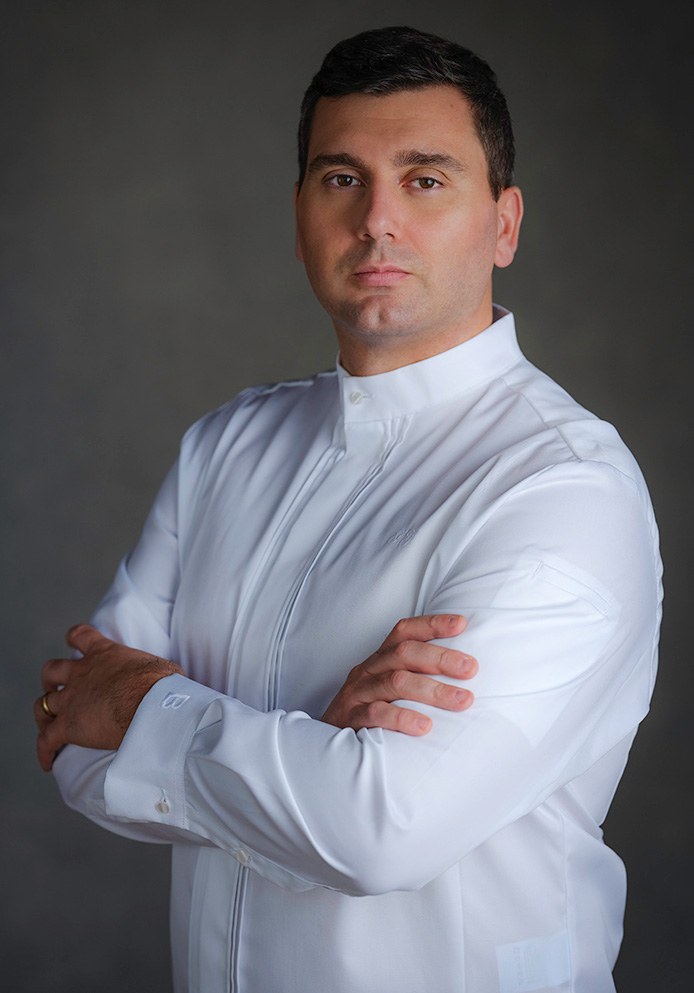 Born and raised in Toulon, France, a port city on the French Riviera between Marseille and Saint-Tropez, Giannini discovered the love of cooking from his grandmother Pierette. "I grew up going to the markets every day with Mamie and picking out fresh vegetables, meats and cheeses as well as fish straight from the sea. She taught me about the value of using the best local ingredients and cooking seasonally," says Giannini.

Giannini's culinary career started in the Michelin starred restaurants of the French Riviera and Courchevel, including at the 2 Michelin starred Le Kilimanjaro. Giannini worked his way from commis to executive-sous chef before assuming his first executive chef role of a 5 star at Hotel at L'Auberge de la Vignette Haute outside of Cannes, France.

A passionate student of the culinary arts, Giannini obtained his Masters in Culinary management while continuously testing his abilities in prestigious competitions such as the Grand Prix Culinaire Escoffier and the French national finals of the Bocuse D'Or in 2010, where he represented La Cote D'Azur. Giannini developed a reputation in classical French cuisine with a French Riviera flair while training at Ducasse Education with Alain Ducasse and Franc Cerutti, two of his mentors along with the celebrated "Pope of Provençal Cuisine" Guy Gedda.

After establishing himself as executive chef of Le Meridien Nice, France, the opportunity arose to export his French Riviera savoir-faire internationally and Giannini took the role of executive chef of the Fairmont Queen Elizabeth Montreal and then The W Montreal. In Canada, Giannini was given the opportunity to share his experience in high level cooking competitions and lead Team Canada to the 2015 World Finals of La Bocuse d'Or as the official coach.

Giannini's American journey began in Washington DC in 2017 when he was named executive chef of the St. Regis Hotel in the footsteps of his mentor, Alain Ducasse, before bringing his French Riviera cuisine to The Watergate Hotel.

Guiding and inspiring his brigade is Giannini's principal motivation. "Cooking is all about transmission. My greatest pleasure is being able to transmit the passion I have for food and for cooking to future generations of great chefs. There is no better place to do this than with a talented team like at Four Seasons," says Giannini.

Giannini begins his tenure with Four Seasons at a key moment in the iconic property's 40 year old history. A two million dollar renovation of the events space concludes in February 2020. As a long-time favourite for heads of state, diplomats, captains of industry, and local Washingtonians celebrating life's great events, the banquet and meeting space design was renovated to reflect the elegance and sophistication of the Hotel's esteemed guests and visitors.

With the renovation, an entire new culinary concept for events based upon offering high-end, high-touch, restaurant-style cuisine and service for groups of 2 to 450 people is also being introduced by Chef Giannini and his talented, multi-national culinary team.

After nearly a decade of international moves Giannini is thrilled to now call Washington, DC and Four Seasons Hotel Washington, DC, "home." When not cooking for the esteemed guests of Four Seasons, Giannini loves to cook at home with his wife and two year old daughter, "a future Chef de Cuisine!" Giannini says with a proud smile.

29 September 2020 — Four Seasons Hotel Dubai International Financial Centre announces the appointment of Renan Astolpho to Hotel Manager. A graduate of International Hospitality and Tourism Management from Bournemouth University in the UK, Renan started his career in hospitality as a manager at The Hoxton Grill London in 2007.
read more