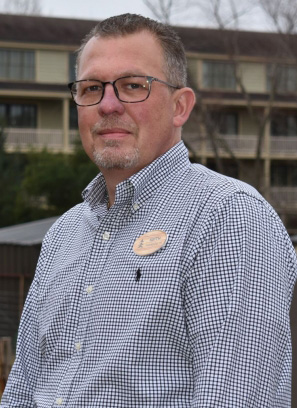 Spinden has worked with Hyatt Corporation for more than 32 years. He began his career in the culinary field and his first role with the company was a cook at Hyatt Regency Greenwich in Connecticut. He was quickly promoted and held various culinary positions ranging from Sous Chef to Executive Chef at Hyatt properties throughout the country.

In 2000, Spinden shifted his career path to focus more on hotel management and took a position as Director of Food & Beverage at Hyatt Regency Grand Champions Resort in Indian Wells, Calif. He also held that position at Hyatt Regency Lake Las Vegas, Grand Hyatt Kauai Resort and Spa, and Hyatt Regency Chicago where he oversaw the food and beverage operations for the largest hotel in Hyatt's portfolio.

Spinden was promoted to General Manager in 2013 at Hyatt Regency Denver Tech Center Hotel, and has served in that role at properties including Hyatt Regency Indianapolis and Grand Hyatt DFW.

Originally from south New Jersey, Spinden attended the Culinary Institute of America in Hyde Park, New York. He has received numerous recognitions and accolades throughout his career including Hyatt's "Food & Beverage Manager of the Year" award in 2012. He currently serves on the board of Visit Bastrop.

Spinden moves to Austin with his wife Debby and 14-year-old son Braedan.