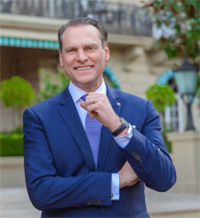 On January 1, 2020, Henning Matthiesen was appointed the new Managing Director of Brenners Park-Hotel & Spa, the principal hotel of the Oetker Collection. The 47-year-old hotelier succeeds Frank Marrenbach who will now devote all his time to his role as CEO of the Oetker Collection. In his new job at the legendary grand hotel in Baden-Baden, Henning Matthiesen will be able to draw on a wealth of experience which he acquired during his career at some of Europe's most renowned hotels.

Henning Matthiesen completed his apprenticeship in Hamburg's historic Hotel Prem, not far from his hometown of Wedel on the River Elbe. This was followed by posts in prominent hotels such as Claridge's in London and Le Royal Monceau in Paris. He continued his career at a number of Kempinski Group hotels, including the Hotel Vier Jahreszeiten in Munich and the Adlon Kempinski in Berlin, where he held the position of Executive Assistant Manager.

Matthiesen's first appointment as General Manager was in 2007 at Coombe Abbey Hotel, a historic English country house close to Coventry. This was followed by the task of opening The Augustine Hotel for the Rocco Forte Collection in Prague, a hotel which he ran until 2011. His services were then called upon by the Grand Hotel Heiligendamm and his most recent appointment was a seven-year stint on the board of the Excelsior Hotel Ernst AG in Cologne.

18 August 2021 — Oetker Collection is delighted to announce the appointment of Stuart Geddes as Managing Director of The Lanesborough, London, taking up his position with immediate effect. Stuart has been Hotel Manager at The Lanesborough for the past two years and brings a wealth of experience in the hospitality industry to his new position, having worked in some of the finest hotels in London including The Ritz and The Goring, where he previously held the position of General Manager.
read more

2 September 2020 — Oetker Collection is pleased to announce that Mr. Simon Neggers will join its executive leadership team as Senior Vice President of Sales, Marketing and Communications as of September 7th, 2020. In his new role, Mr.
read more