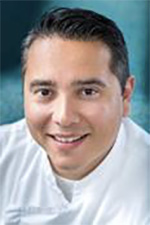 Balboa Bay Resort, the premier waterfront resort in Newport Beach, California, is pleased to announce the appointment of Octavio Sabado as its new Executive Chef. With two decades of culinary experience, Chef Sabado will oversee the resort's culinary portfolio including the property's two waterfront restaurants, Waterline and A&O Kitchen+Bar, café, banquets and catering, and in-room dining.

Chef Sabado will enhance and fine tune each culinary offering at A&O Kitchen+Bar and Waterline. Chef Sabado is inspired by light, fresh food, defined by seasonal flavors. For A&O Kitchen+Bar, he plans to pair food with the standout cocktails on the menu and at Waterline he will highlight sustainable ingredients in healthy fresh dishes.

Prior to joining Balboa Bay Resort, Chef Sabado served as Executive Chef at Westdrift Manhattan Beach, where he conceived JUTE Coastal Bar and Kitchen, the hotel's signature indoor-outdoor restaurant. He began his hospitality career at the St. Regis Monarch Beach in 2001. From 2004 - 2007, he worked with T-Bird Restaurant Group where he learned front of the house duties, and in 2007 he left to join the Viceroy Hotel Group. During his four years with the hospitality group, Chef Sabado rose to Executive Chef and he helped open restaurants at the group's Miami, Anguilla and Abu Dhabi properties. Chef Sabado continued to finetune his cooking and business administration skills as Executive Chef at SLS Hotel in Beverly Hills where he oversaw The Bazaar by José Andrés and Altitude.

Born and raised in Mexico, Chef Sabado came to the United States when he was 11 years old. Chef Sabado worked in restaurants as a teenager and dreamed of becoming a pilot. After the U.S. Navy, he studied aeronautical engineering at Arizona's Embry-Riddle Aeronautical University, but soon found his true passion behind stoves instead of behind textbooks. Soon after, he enrolled at California School of Culinary Arts in Pasadena where he earned an Associate's Degree in hospitality administration/management.

Chef Sabado lives in Whittier, California with his wife and two children. A lover of vintage cars, he owns a 1968 El Camino and a 1956 VW Beetle among others. On the weekends, he can be found camping with his family, visiting his favorite LA restaurants, and walking his dogs, an Australian Shepherd and Old English Sheepdog.