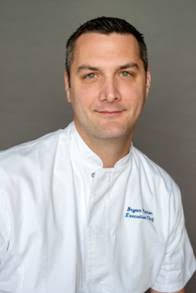 Bryan Patton, a seasoned hotel and banquet chef, comes to his new position with extensive experience. Previously, he served as the Executive Sous Chef at the Hyatt Regency Dallas at Reunion Tower where he oversaw banquets, events, and worked to develop menus for the hotel's eateries as well as on-site and off-site events. Patton has also worked at the Hyatt Regency Century Plaza in Beverly Hills, Andaz West Hollywood, Hyatt Regency La Jolla and the Hyatt Regency Milwaukee. Additionally, he specializes in large catered business and social affairs from 500 persons and up, including Super Bowl LIII in Atlanta.

Raised in Los Angeles, Bryan was first introduced to cooking as a young boy by his Polish grandmother & spent a significant amount of time cooking with his mom & younger brothers. Bryan introduced his siblings to the Culinary profession, where they continue to flourish; one is a Chef while the other manages restaurant operations. In addition to spending time with his wife & children, Chef Patton enjoys collecting cookbooks, fishing and cooking fresh seafood, listening to various types of rock and is an avid car enthusiast.

As the Executive Chef at Delta Hotels by Marriott Dallas Allen, Chef Patton is responsible for overseeing the staff and menus at the main dining areas of the hotel, in addition to banquet and convention operations, as well as menus for the hotel's events, conferences and galas. Through his role, Patton intends to focus on local and sustainable cuisine, minimizing waste, and participate in a variety of North Texas community events.