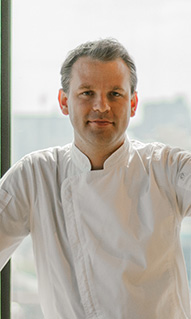 In his new role, Chef Vaiciunas is responsible for directing and overseeing food service operations throughout the property. He develops menus for the hotel's food and beverage establishments, as well as special events, private events and in-room dining options while ensuring quality assurance in culinary operations. With an impressive resume working at establishments across the country, Chef Vaiciunas will manage the food and beverage team, oversee budgets and provide an exceptional e xperience for guests.

Chef Vaiciunas began his career at the distinguished Detroit Athletic Club, widely recognized as home to several certified Master Chefs. During his time in Detroit, he was awarded "Best Chef" by the Detroit Metro Times, "Up and Coming Chef" by Metro Detroit and "Best Restaurant for Top of the Pontch" by the Detroit Free Press. After venturing from his hometown of Detroit, Chef Vaiciunas moved to Chicago for a corporate chef position with Whirl Management, LLC and subsequently worked in Salt Lake City. He then accepted a position as executive chef at The Local House, a boutique hotel located in Miami Beach. Most recently, in 2018, he opened and created the entire food and bev erage program for The Guild Hotel, a Tribute Portfolio hotel in downtown San Diego, leading the establishment's restaurant to being named "Hottest New Restaurant" by Eater San Diego.

In 2015, Chef Vaiciunas competed on the Food Network's "Cutthroat Kitchen" with celebrity chef Alton Brown. Chef Vaiciunas graduated from the Schoolcraft College Culinary Arts Program in his hometown of Detroit.