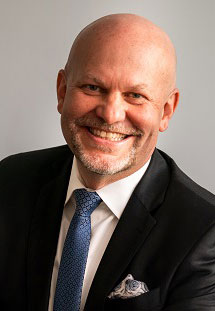 Christophe Thomas has an important international career, from Europe, to South America, passing through the Caribbean and then the United States.It all started at the Lycée Hôtelier de Strasbourg where, then graduated with a Bachelor, he became passionate about the art of hospitality and the excellence he wanted to sublimate and perpetuate around the world.His determination and expertise lead him as Managing Director in prestigious hotel establishments in the United States for 20 years. He notably orchestrated the repositioning strategy of the Palace Hotel in San Francisco, the iconic hotel "The Luxury Collection".More recently, in 2016, Christophe Thomas joined the teams of the SLS Beverly Hills hotel in California, where in 2019, the Somni restaurant obtained 2 MICHELIN stars, positioning the restaurant among the best tables in Southern California.

21 December 2020 — Mövenpick Hotel Colombo welcomed Roshan Perera as their new General Manager on December 15. Roshan started his career as a trainee in 1986, at the InterContinental Hotels Group, after which he worked for leading hotel companies such as Lanka Leisure Management Services (Pvt Ltd), Taj Hotels Resorts and Palaces, The Blue Water where he served as the General Manager for 4 years and then as the Chief Executive Officer for the group, Union Resorts Ltd while he continued to serve as the General Manager of The Blue Water totalling nearly 12 years of his career.
read more

16 December 2020 — Fairmont Dallas is proud to introduce Jean-Francois Fortin as the hotel's new Executive Chef. Chef Fortin has a wealth of culinary management experience from over twenty two years in the industry, most of which served at Fairmont hotels across North America.
read more

7 December 2020 — The Egyptian brings 16 years of know-how to the job, having started out in InterContinental Hotel Abu Dhabi, where he was quickly elevated to banquet operations manager. In 2011 he joined Fairmont Bab al Bahr as banquet operations director, later being promoted to conference services and catering director.
read more
More from Accor
Map
Advertisements
Never miss a story again
Sign up for the HN360 daily newsletter
Media Kit – Submit Content
Advertisement
Advertisements