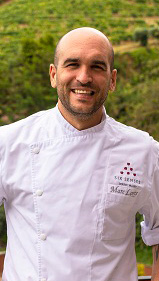 Marc Lorés Panadés recently come on board at Six Senses Douro Valley as the resort's executive chef. He joins from his previous four-year stint as executive chef and food and beverage director at the acclaimed Alila Hotel in Bali, renowned for healthy, plant based forward cuisine and zero waste.

Marc hails from Lleida in Catalonia where his mother still lives and works the farm on which he grew up. After training in some of the best restaurants of Spain (El Bulli, Mugaritz) his exciting international career included tenures in Austria, England, Denmark, Germany and Hong Kong. Along the way, Marc has developed a distinctive style of cuisine. He loves growing his own food and sourcing the best local ingredients to create vibrant nutritious dishes, using both modern techniques and the best of local culinary traditions.

A highlight of his career was as head chef of Cal Xirriclo in Lleida, a modern fine dining restaurant, recognized by Michelin for producing wonderful dishes from local organic ingredients. It was here that Marc appeared on several cooking shows, wrote a food blog for the local paper, and won several of Spain's top culinary awards. including Best Dish at the Negrini Creative Cuisine Madrid in 2012 and 2016. His thirst for adventure eventually has led him to Hong Kong and ultimately to Bali.

Marc is accompanied by his wife Olivia, and in what little spare time he as, Marc likes to unwind by training for endurance sporting events, which have included several Ironman triathlons. Six Senses Douro Valley is as excited he is to take on this new challenge, and his reputation as an enthusiastic leader who is passionate about healthy vegetarian-focused food and sustainability will stand him in excellent stead.

17 June 2021 — Crowne Plaza Today New Delhi Okhla is pleased to announce the appointment of Shuvendu Banerjee as the new General Manager. With an illustrious experience of more than two decades, Shuvendu Banerjee has held leadership positions and worked with renowned domestic and international hospitality brands across the country.
read more

19 May 2021 — Crowne Plaza Terrigal Pacific has appointed Ben Hislop as Director of Sales & Marketing, joining the team in Terrigal in April 2021. Hislop's return to his native Central Coast follows more than a decade of work for parent company IHG® Hotels & Resorts across a number of Crowne Plaza® and Holiday Inn® hotels in Australia.
read more

12 May 2021 — Crowne Plaza Dubai Marina has promoted its EAM to the position of operations director after exceling in his role for almost two years. Rikhsibay Tursunov has been with the property since its pre-opening phase and has been described by the GM at "pivotal" for the hotel's operations and F&B success.
read more
More from IHG
Map
Advertisements
Never miss a story again
Sign up for the HN360 daily newsletter
Media Kit – Submit Content
Advertisement
Advertisements