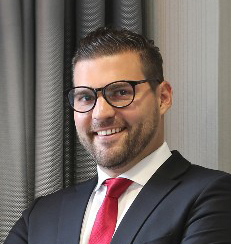 Robinson's decade-long career in hospitality has seen him work across the US, Middle East and Asia, starting with a trainee role with Hyatt Regency La Jolla in San Diego. In 2009, he moved to the Middle East as pre-opening assistant manager - front office with Grand Hyatt Doha in Qatar.

In 2011, Robinson joined Park Hyatt Dubai as assistant front office manager, followed by a promotion to the role of front office manager a couple of years later. The New Zealand national then relocated to Vietnam in 2016 to work as director of rooms for Caravelle Saigon in Ho Chi Minh City. Later in the year, he was promoted to his first general manager role for the same property - his last assignment prior to joining Minor Hotels.

24 November 2020 — Chin, a Thai-born Master of Arts in Tourism alumnus and former university lecturer, joins Anantara Angkor Resort in Cambodia from the Sofitel Luang Prabang and 3 Nagas Luang Prabang, Laos, where he rose through the ranks to become Cluster General Manager.
read more

23 November 2020 — With more than 25 years of hospitality industry experience, Sarah started her career in her native Philippines where she climbed the sales and marketing ladder to lead teams for Hyatt both in Manila and then Siem Reap in Cambodia.
read more