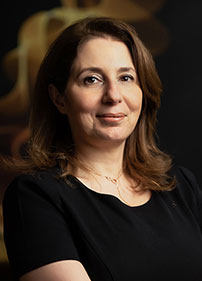 As the first Omani female hotel manager and an experienced professional hotelier, Nadine El Assaad Al Bulushi has proven to be a creative, efficient leader who believes that the success of an organisation comes from a competent and innovative team.
Nadine brings over two decades of experience in hotel operations to her new role with Kempinski Hotel Muscat, starting her career as Front Office Agent at Crowne Plaza Muscat and later being promoted to Assistant Front Office Manager.
Nadine next joined the Grand Hyatt Muscat, where she occupied several managerial positions in the rooms' division. During her tenure with Hyatt Corporation, Nadine supported the openings of Hyatt Regency Taba, Egypt, and Park Hyatt Dubai, UAE, as part of the opening task force. In 2006, Nadine made the move from her room division background to the position of Director of Revenue, and, afterwards, Director of Sales and Marketing with Radisson Hotel Group. As part of her career with the Radisson Hotel Group, Nadine supported the opening of Radisson Blu hotels in South Africa, as well as providing regional support for the hotels in Ethiopia, Libya, Kuwait, and Bahrain. Later, she moved on to a cluster role as EAM and Director of Revenue at Radisson Blu Muscat and Sohar.
Nadine joined Kempinski Hotel Muscat as Executive Assistant Manager in January of 2019, where she has managed to understand and fully commit to every DNA value in a way that is uniquely Kempinski. She created traditions in the work environment, showed entrepreneurial performance and proved how people-oriented she can be even with our smallest guests and why even those just joining Kempinski have a passion for European luxury.
With her revenue background, Nadine was able to swiftly enhance the Sales and Revenue departments and soon managed the operations of the Food and Beverage Department, consisting of a total of 11 outlets.
Her excellence and hard work, during these unprecedented times of the COVID-19 outbreak, even beyond her duties, have been a great inspiration to us all, and her compassion for each employee has proven her truly worthy of this promotion.

25 August 2020 — The soon-to-be-opened new top luxury hotel in Shandong province, Kempinski Hotel Jinan, is now headed by General Manager Christian Wiendieck, who has just been appointed to his new position. A seasoned hotelier, he can look back on an outstanding career of more than 20 years within the Kempinski brand, joining the Jinan pre-opening team from his last assignment as general manager at Kempinski Hotel Fuzhou.
read more