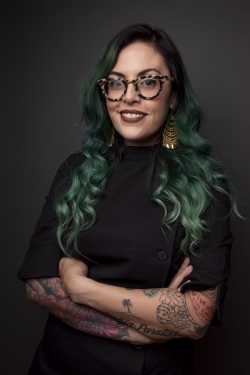 Alila Marea Beach Resort Encinitas today announced San Diego-based James Beard Award semifinalist Claudette Zepeda as Executive Chef. In this role, she will oversee the opening of multiple food & beverage concepts and lead the culinary team at the highly anticipated hotel that is slated to open in early 2021. Located in one of Southern California's most iconic seaside towns along the coastal bluffs, the opening of the 130-room Alila Marea Beach Resort Encinitas will mark a significant milestone, as the Alila brand's first new-build resort in the Americas and only the second Alila property in the U.S.

Most recently, Chef Zepeda garnered national acclaim for her time as the executive chef and partner at El Jardín, a regional Mexican restaurant in downtown San Diego. During her tenure, El Jardín was included on Esquire's 2018 Best New Restaurants list and was named to Michelin's on Bib Gourmand list in 2019. She was named "Chef of the Year" by Eater San Diego and the San Diego Union Tribune in 2018 and was a James Beard Best Chef West semifinalist in 2019. Prior to El Jardín, Zepeda was chef de cuisine at Javier Plascencia's celebrated Bracero and competed on Bravo's "Top Chef" Season 15 and "Top Chef Mexico."

At Alila Marea Beach Resort Encinitas, Chef Zepeda will lead all culinary offerings at the Resort, including its signature restaurant, VAGA Restaurant & Bar; inviting locals and travelers to experience the confluence of rich and diverse cultures in San Diego through her vibrant cuisine. Chef Zepeda's commitment to responsible sourcing will be revealed through a menu that showcases the simplicity of California cooking.

Guests at VAGA will have the opportunity to pair their meal with dramatic coastal views or peek behind the scenes with a front-row seat to Chef Zepeda's open kitchen - both certain to delight the senses. The beverage program will maintain seasonality and integrate ingredients from the dining menu, featuring rotating signature cocktails, local microbrewers and a wine list carefully curated with thoughtful selections of natural wines utilizing grapes from low intervention/biodynamic vineyards.

13 November 2020 — Shobhit Sawhney has been appointed the new General Manager of Park Hyatt Hyderabad - one of the most luxurious 5-star hotels in the City of Nizams. A seasoned hotelier with a career spanning over 20 enriching years across various brands in India and overseas, Shobhit was earlier handling the role of General Manager at Hyatt Regency Pune.
read more

12 November 2020 — Hyatt Regency Phnom Penh has announced the appointment of seasoned culinary professional Richard Bias as the hotel's new executive chef. The British national has worked in some of the world's top kitchens and hotels and brings more than two decades of culinary experience to Hyatt's first property in the Cambodian capital.
read more

10 November 2020 — A hotelier with over 25 years of experience joins the hotel from Hyatt's regional office in Zurich where he held the position of Regional Vice President, Hotel Openings. During the 4 years in the role, he oversaw the openings of several key hotels including the Grand Hyatt Abu Dhabi, Hyatt Regency Addis Ababa, Andaz Vienna, Andaz Munich, Great Scotland Yard Hotel London, Park Hyatt Doha, rebranding of the Hotel du Palais in Biarritz and many more.
read more
More from Hyatt
Advertisements
Never miss a story again
Sign up for the HN360 daily newsletter
Media Kit – Submit Content
Advertisement
Advertisements