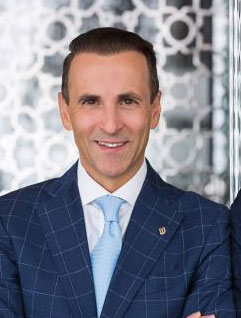 Joining the hotel as of the 1st November 2020 with more than 25 years of hospitality experience, Savino has an extensive international career, having held previous roles spanning the globe in countries including Japan, Egypt, the UK, Dubai and France. Savino has been at the helm of several successful hotel openings and with a passion for food & beverage, he is committed to driving luxury service, quality standards and developing teams.

Under Jumeirah Group's committed management for years to come, Jumeirah at Saadiyat Island Resort is Jumeirah's flagship property in Abu Dhabi and sits majestically on the island's prime beach, providing a backdrop of refined island life and quiet understated luxury. Under his leadership, Savino aims to maintain and exceed its leading reputation as a luxury hotel in the region.